Last weekend we attended the Melbourne Formula 1 Grand Prix as a family.  I’ll be honest, I was not entirely sold on the idea when my husband suggested it, but in the end IT WAS AWESOME!!! OK, so maybe not every single minute of the hours we were there, but definitely enough of those moments to make the outing worthwhile.  There are few things I would have done differently, which you’ll see in the tips at the end, but overall IT WAS AWESOME!!! 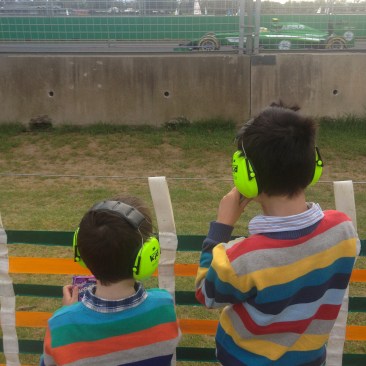 Lots of entertainment for the crowds. That’s Tony Hawke in the air.

All of us in the family enjoy motorsport, but we are not rabid fans.  I don’t know the names of all the Formula 1 drivers and their teams and I certainly don’t know all the rules.  In fact, when I first started watching F1 with my husband I found it quite difficult to get into.  Then one day a friend explained it to me, he said it’s like a soap opera, it’s not just about the race, it’s also about everything that’s happened in the lead up. There are characters with long term grudges and various people within teams with their own agenda.  Secrets and strategies.  And the fun is seeing that all unfold in the race.  That was a turning point for me, before then I kinda liked it, after that I thoroughly enjoyed it.  I realised that, like many sports, there is a critical mass of knowledge you need before you can fully enjoy it. So every time I watch it with my husband he has to suffer a barrage of questions. (;

Up until the day of the race I was non-plussed about attending.  Even though children attend free, the general admission tickets for adults were $99 each. I thought there were better ways to spend a couple of hundred bucks.  However, when the day arrived, and the Australian Ricciardo had qualified on the front row, I was pumped.  There I was trackside, cheering as the drivers went by in their parade, starstruck seeing people in the flesh that I’d been watching on TV all those years.

Raceday is not just about the race.  Around the track there are all kinds of things going on.  There were live bands, sideshow activities for the kids, aerial displays, this strange act where a man on a motorbike rode along a wire with an acrobat hanging from his bike and, my favourite, the skateboarding display by “Tony Hawke and friends”. Mr Hawke was truly as amazing as he’s made out to be.  I’d never thought that skateboarding tricks could look beautiful, but he made them look so elegant and soulful.  Weird right?

We bought some expensive takeaway food and found a place to watch the race.  We decided to go to one of the less-crowded locations where we could be very close to the track.  That way the children could still see the cars and also have a bit of room to muck around in when they were ‘over it.’ It worked out well.  Last time I was trackside I was about 7 months pregnant, it was hot and I had no idea what was going on.  This time it was a bit cold, the PA was much clearer and the car engines were quieter, so I had a much better idea.  As the cars flew by I could tell whether gaps were getting bigger or smaller and the PA would inform me of any incidents elsewhere on the track.  We downloaded the F1 app to our phones, but it was a fail.  I think the network in the area couldn’t cope, so it was useless for keeping track of the race.

When the children weren’t into the race they read some books and played around on the grass.  We also had a steady supply of lollies to soften the blow of hanging around with nothing much to do. Time was also broken up with toilet breaks.  Thankfully there were adequate facilities. I always fear inadequate facilities on outings with the children, because they don’t always give much warning of requiring them.

Towards the end of the race we headed to the part of the track closer to the podium, in preparation for the absolute best part of the event: when the crowd runs onto the track in a mad dash to get to the podium.  Actually at first it’s a slow crawl as everyone tries to squeeze through gaps in the barrier (or dangerously climb over them).  Once through we ran like crazy people past a race car getting towed and then hoisted the kids in the air so they could see an Aussie on the Australian Grand Prix podium for the first time ever! So exciting! 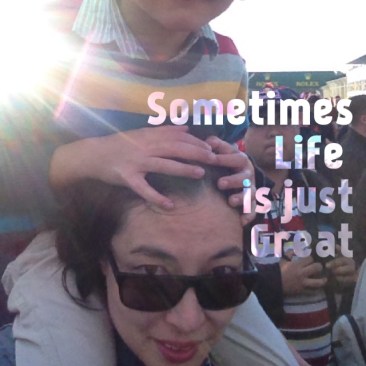 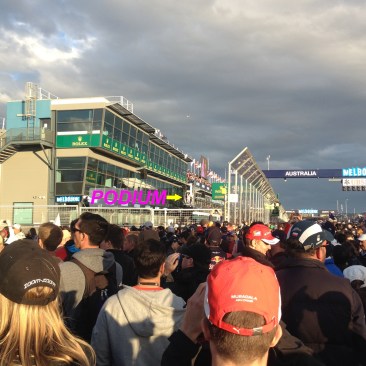 Look carefully in the centre of the picture, that’s the podium.

(Ricciardo was later disqualified for his car being non-compliant, but Red Bull have an appeal hearing about this in April.)

Then we walked along the track and had some photos.  My heart was still pumping from the excitement and my extreme lack of fitness.  It was a very slow journey into the city after that because we arrived at the tram stop to a broken down tram.  No one could say when things would get moving again, so we decided to walk it.  Only to watch the trams roll past us a few minutes later, not stopping because they were express to the city to deal with the crowds. Grrr.  Still, spirits were high in the crowd and the good vibes were flowing and I will always remember it as a wonderful day. 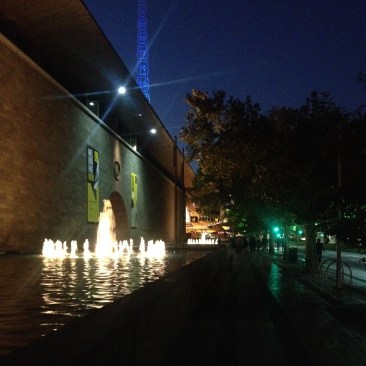 On our walk to the city we passed the National Gallery of Victoria. 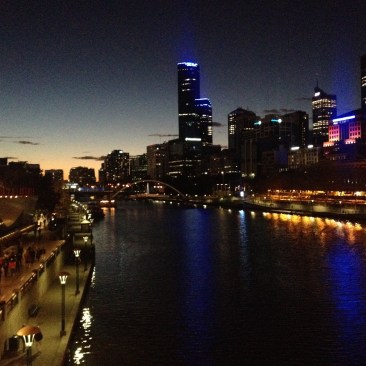 Crossing the Yarra River into the city.

Have you attended a Formula 1 Grand Prix or something like it? Did you take the kids? Was it AWESOME? Let me know in the comments, I’d love to hear from you.